Six years later and with far more successes than failures, the results of the Ottawa REDBLACKS’ inaugural season are outweighed by the foundation that was put in place.

The REDBLACKS’ first-ever win was pretty well what you’d hope for — an 18-17 triumph over the visiting Argos in Week 4 of the 2014 season — and there were elements of that foundation on display.

On the field, it started with the REDBLACKS’ defence, which held Ricky Ray and the Argos’ offence to just one touchdown while intercepting him twice (one coming on the game-sealing pick by Jasper Simmons) and sacking him three times. Ottawa landed in a ton of low-scoring, grind-it-out games in 2014, but didn’t have the offensive firepower to take advantage. To win their home opener, they needed the steady foot of Brett Maher, who went a perfect 6-6 against the Argos. 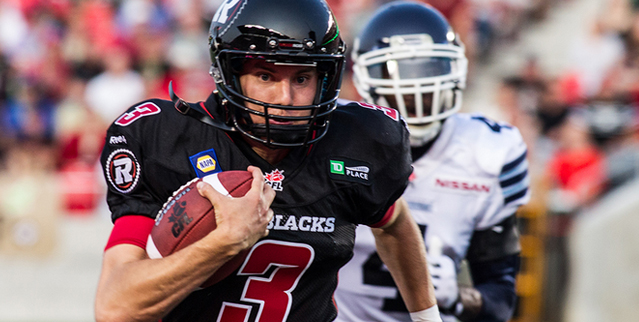 Brett Maher picked up some rushing yards in the REDBLACKS’ home debut on July 18, 2014. He also made all six of his field goal attempts, including the game-winner (Photo: REDBLACKS.com)

“If you’re a kicker and you don’t want to be in that position, you’re probably not going to thrive in it,” Maher told the Ottawa Citizen after the sellout crowd of 24,326 went home happy from TD Place.

“I was excited to be there, excited that the offence did a great job moving the ball (into field-goal position).”

In the REDBLACKS’ episode of Remote Reunion driven by Kubota, Maher said that the home-opening win was one of the standout moments of his career.

“The moment for me was amazing,” Maher, who’s now kicking for the Dallas Cowboys told CFL.ca’s Brodie Lawson.

“This was my first real exposure to a professional football game. That first kickoff in that place was electric and that was something that this season and this game in particular will always rank high for me in my professional career.

“The crowd was just on the entire night. That doesn’t always happen. This night, it definitely did.”

Expansion teams are never expected to fare well, even in the CFL, which increased its team count to nine with the REDBLACKS taking the field. There were plenty of lumps for the 2014 team to take but the mainstays on the team, including head coach Rick Campbell and starting QB Henry Burris were able to keep that difficult season in perspective and build for their future.

In a season where the highlights were few in terms of wins and losses, you had to celebrate the positives when they came.

Simmons was an Argo in 2013 and signed with the REDBLACKS as a free agent. After he got his game-sealing interception, he celebrated with a Nail Yakupov-like slide on the turf. He knew that his former boss, then-Argos’ GM Jim Barker, was on the sideline and he wanted to let him know what he’d let go over the winter.

“I was so happy because Jim Barker was on the sideline. I was right in front of him, I was so happy about that,” Simmons said, drawing some laughs from his former coach and teammates.

“I actually got the picture where you can see Jim Barker and you can see me sliding. I’ll always remember that, always.”

The REDBLACKS made adjustments over that off-season and quickly put their inaugural season record behind them. Ottawa went 12-6 in 2015 and played in the Grey Cup game, losing to Edmonton. 2016 was their payback, where they put a middling record (8-9-1) behind them and stunned a 15-win Calgary team in the Grey Cup, bringing the trophy back to the nation’s capital for the first time since 1976.

“There’s been some big games won in that stadium,” Campbell said. “We won three East Finals in that stadium which were awesome, but I’d put (the opener) up there with all the great moments that have happened in a short time in that stadium. That was definitely one of them.”

“That was as fun as I’ve had playing football,” Maher said. “It was the guys in the locker room, the atmosphere on game day. It was fun every day.”

“I wish all these guys’ names could be on the Grey Cup because they helped establish the foundation of what ultimately became one of the most successful franchises over the first five years,” Burris added.

“Because of guys like Jasper, guys like Brett and the rest of the guys that came in and got it started.”