When you look back at a game that turns 12 years old on Sunday and how it finished, you can’t help but wonder what if.

The 2008 Western Final saw the Calgary Stampeders trail almost the entirety of the game, locked into a defensive battle with the BC Lions. Henry Burris got Calgary its first lead of the day just over three minutes into the fourth quarter on a one-yard plunge into the end zone.

The game came down to two plays. First, Burris got the ball on third down with four seconds left and tried to throw it as high as he could to run out the clock. He got 75 per cent of his goal. The ball hit the ground with a second left in the game and the Lions down four. Buck Pierce took control of the BC offence at Calgary’s 41-yard line.

This game will re-air Friday on CFL.ca as a part of the CFL in 40 presented by CDIC broadcasts.

Pierce took the snap and rolled out to his right before he looked downfield. He saw an end zone littered with familiar white and orange jerseys and hostile, we’re-not-having-this black and red ones. The clock at zeroes, he had no choice but to sling it. Four Calgary defenders swarmed the incoming ball and batted it away from Paris Jackson, cementing their spot in the Grey Cup game and bringing the Lions’ season to an end. 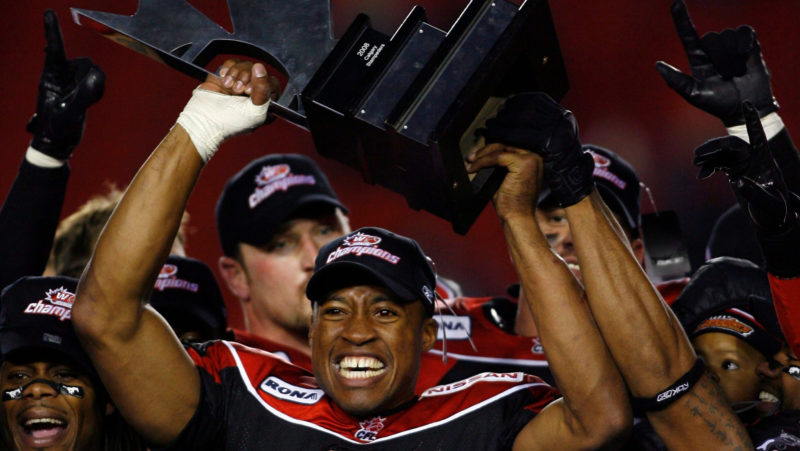 The odds of that Hail Mary being answered are low, but we’ve all seen it miraculously happen at every level of football. What if it had worked out for Pierce and the Lions that day in Calgary? What if Paris Jackson had overcome the odds and the tight coverage and made that catch? Would the Lions have been able to steal the Als’ thunder at home a week later in the Grey Cup?

What might it have meant for Pierce, who was hindered by injuries for the bulk of his career. Ironically enough, Pierce got his shot in a Grey Cup game three years later, playing for Winnipeg. The game was of course against the Lions in Vancouver, where BC wrote the final chapter in its storybook season.

The game came down to those final two QB tosses but as any coach will tell you, the hundred or so other plays before them were equally important.

The late Mike Labinjo, a star defensive end for the Stamps, was a monster on the field that day. He had six tackles, three sacks and a forced fumble. He helped the Stamps hold their ground on a pair of goal line stands, forcing the fumble on one. His sack for a loss of 12 yards on Pierce snuffed out a fourth-quarter BC drive. A week later in Montreal, Labinjo would have an impact again with two tackles, a sack and three knockdowns as the Stamps lifted the Grey Cup after defeating the host Alouettes.

You’ll get a chance to see why CFL.ca’s Jamie Nye called this the Stamps’ biggest Division Final win ever. You’ll see Labinjo shine, you’ll see Burris grind things out on offence for the Stamps and you’ll see Pierce and the Lions get their shot at an ultra-dramatic ending. You can wonder what might have been had the improbable panned out or if you’re a Stamps fan, you can hold your breath and relive the moment that your Grey Cup hopes hung in the balance. It’s a feeling that goes hand-in-hand with the month of November in Canada.

Landry: The CFL playoff format of yesteryear that was beyond belief
Stampeders announce 2021 coaching staff