Armchair general managers are salivating this week after scouring the pending free agent list of all nine teams for 2021.

Real general managers are waking up with a massive headache now that they have two months to negotiate extensions with players they want back or come up with the budget that’s going to work to lure some big names in.

The 2020/21 off-season is going to be an interesting one to follow, as many players signed in February of 2020 for one year deals and never played on those contracts. They either never got to play on a new team or they didn’t get the chance to give it one more year to see if their role increased or if the team was strong enough to compete.

The priorities of the players will be interesting to follow. Do they have a sense of loyalty to re-sign? Will re-signing give them a better sense of stability with still some uncertainty over a 2021 season, especially if they’ve put down some roots in community?

Looking at the expansive list of free agents, you most definitely would rather be one general manager over another.

But don’t just look at who has the most free agents and think that’s the toughest job. Remember, the teams with the most players under contract for 2021 will have the least amount of flexibility financially to make the numbers work in a post-COVID-19 world in the Canadian Football League.

Nobody will truly know the landscape in which they’re working under. The big money contracts doled out over the last few seasons will not be easy for some teams to work into a tighter budget, especially the teams with franchise quarterbacks making a big chunk of the salary cap.

But when you skim through the list of free agents, it’s not hard to pick out who is going to have the biggest headache. You look at the Canadian starters who are set to become free agents, the offensive line and the big name playmakers.

Each General Manager will have a must sign list. Here are the top three priority free agents to sign, in no particular order. (Note: Be thankful I’m not running any of these teams)

From east to west:

DB Monshadrik Hunter (25) – The youngster came over from the Edmonton Football Team to try and help solidify the back end of the defence in Montreal. He’s familiar with new defensive coordinator and DB coach Barron Miles and type of system he’d like to run. I can imagine it wasn’t a coincidence he moved over with Miles from Edmonton and the new defensive coordinator can potentially use him in multiple spots.

WR Eugene Lewis (27) – You do not want to lose Vernon Adams Jr.‘s favourite target as Adams is looking to build of a great 2019 season. Lewis eclipsed the 1,000-yard barrier for the first time in his young CFL career and appears to have many more ahead.

LB Henoc Muamba (31) – The risk with Muamba is whether Danny Maciocia will look at age as a problem. But if you’re trying to establish a new defence, you could use the veteran leadership in the middle to be able to recognize and organize everybody on the defensive side of the ball. Muamba has over 200 tackles in the last two seasons in Montreal, and there isn’t any sign of slowing down for the veteran Canadian.

OL Evan Johnson (26) – You do not want to lose a young offensive lineman, who already has three years under his belt and is becoming a consistent performer in the CFL. He also brings the University of Saskatchewan pedigree with him that has seen players like Gene Makowsky, Scott Flory and Ben Heenan become Grey Cup champion calibre linemen.

LB Don Unamba (31) – The REDBLACKS signed Unamba this past February to bring in a playmaker on defence that they’ve been lacking. Unamba is all over the field and could become a necessary piece to the puzzle for Ottawa, who gave up a league-worst 564 points in 2019.

OL Mark Korte (24) – Again, you can’t let young offensive lineman with starting experience go, especially someone who could develop into a ratio breaking Canadian tackle. You want to see more out of the fourth overall pick from 2018, but you also don’t want to see it on another team. And I know how much Marcel Desjardins stresses loading up top Canadian talent on the offensive line.

LB Chris Ackie (28) – A free agent from the Alouettes, Ackie came into help the defence in Toronto and the Canadian is vital for so many reasons for the Argonauts to improve. He brings incredible speed and hitting ability to the defence and another player in the CFL that can lineup in multiple spots.

WR Juwan Brescacin (27) – Brescacin is another free agent from February that never got to lineup in Toronto. They are both starting Canadians and giving the Argos depth at Canadian spots will only allow them to get better across the board. 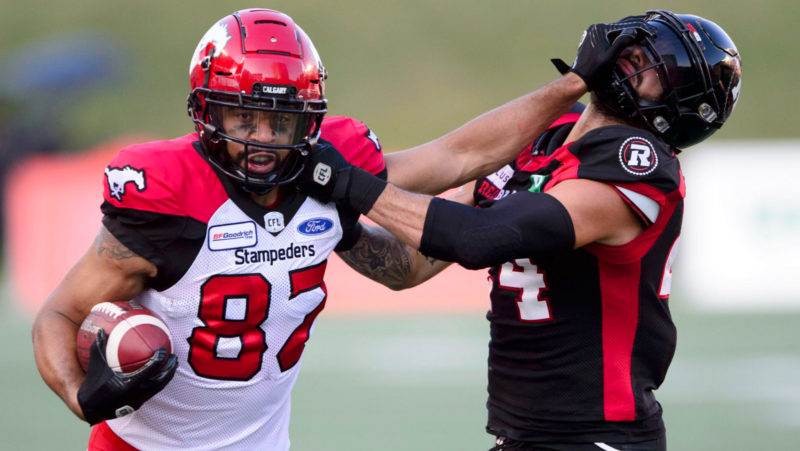 OL Dariusz Bladek (26) – I’ll complete the trifecta. Bladek was a young, starting free agent Canadian that the Argos brought in to improve the talent on the offensive line. The big, strong guard coming from Saskatchewan has plenty to prove and a bit of a chip on his shoulder. He’ll help protect Matt Nichols but takes the most pride in driving defenders five yards backwards in the run game.

OL Brandon Revenberg (27) – He has been everything the Tiger-Cats wanted in their third overall choice as he’s not a back-to-back All-Star and working his way toward offensive lineman of the year calibre. Eight other teams would love to get their hands on him but don’t think for a second Hamilton won’t have him signed before that February deadline.

WR Brandon Banks (32) – Okay, there will be a few captain obvious ones on the list. Here is the first.

DB Patrick Levels (26) – When I saw him as a potential free agent last year, he was near the top of my list to go out and get if I were running a team. It seemed unfair that the Tiger-Cats picked him up with all the talent they had. With some of that talent listed beside him on the free agent list this off-season, I think it has to be a big priority to have him line up in black and gold in 2021.

RB Andrew Harris (33) – I don’t even care he turns 34 before the 2021 season. He’s been a few hundred yards short of a total of 2,000 yards from scrimmage in every season in his 30s. Oh and an extra year off will just allow him to heal up even more.

OT Jermarcus Hardrick (30) – Usually, I go with the Canadian offensive linemen. But this time I’m putting Hardrick’s name down as he is the most underrated offensive lineman in the CFL in my estimation. With Stanley Bryant hitting the mid 30s at left tackle, you never know when it’s going to end and you don’t want to go into a season with two brand new tackles. 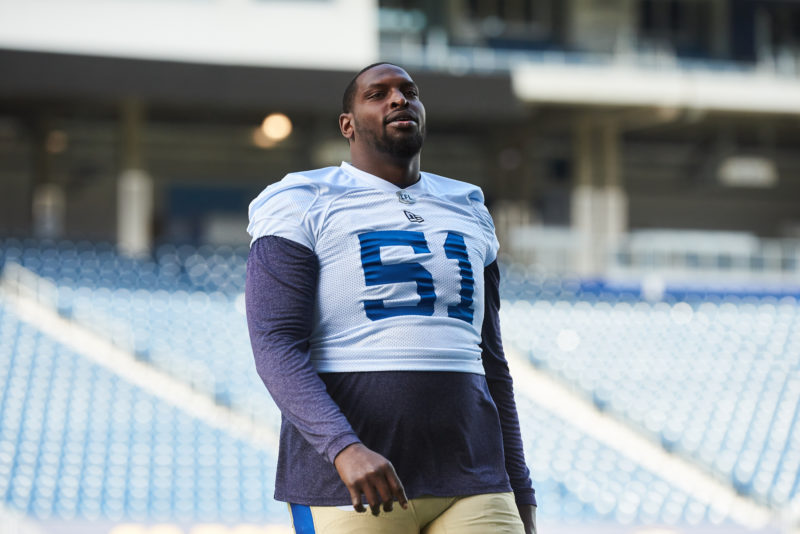 Will the Bombers ink Hardrick to an extension before he becomes a free agent on February 9? (BlueBombers.com)

DT Jake Thomas (30) – You want to know why the Blue Bombers are able to stuff a lot of third and one plays? Jake Thomas. The big man in the middle is the starting Canadian who gets overlooked at defensive tackle because of guys like Cleyon Laing and Ted Laurent but there is no denying in Winnipeg, they think he’s on par with the bigger name players. Losing him would be a massive hole to fill.

WR Shaq Evans (29) – Cody Fajardo‘s No. 1 target is an absolute NECESSITY to have back in Saskatchewan. He and Fajardo were starting to bring back memories of some of the great QB/WR tandems in 2019. Evans can stretch the field and be a reliable second down receiver. It feels like he’s just hitting his prime.

S Mike Edem (31) – Edem is the Swiss Army knife for the Roughriders defence. Edem does so much from lining up near the line of scrimmage and blitzing from everywhere to dropping back and playing man coverage. He will be a tough person to replace with everything Jason Shivers asks of him on the Riders defence.

DB Nick Marshall (28) – I think Nick Marshall is becoming a scary man for opposing quarterbacks to throw to. Some will remember a tough night in Ottawa but when you look at all the passes picked up on him, he had incredible coverage. Marshall is always on his man and has the speed to make up for a misstep from time to time. Another key person for the Riders to start sending more pressure, knowing they have it locked down in the secondary. 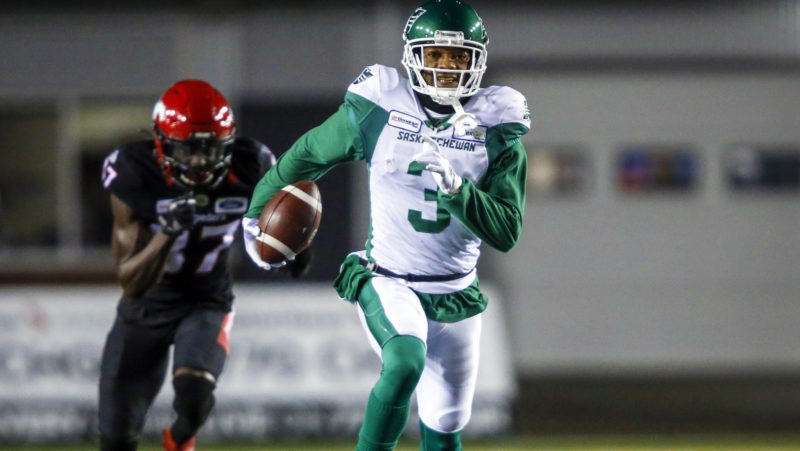 In his second year with the Riders, Marshall tallied 39 tackles, five interceptions and a touchdown (The Canadian Press)

OL Ryan Sceviour (25) – Sceviour is the next one for the Calgary Stampeders offensive line. He’s a young Canadian who took a tremendous step up in his career in 2019 and there is no way John Hufnagel will allow a potential All-Star Canadian get plucked away from a rival. He has to be at the top of the priority list for the Stamps.

OL Brad Erdos (30) – If you don’t think protecting Bo Levi Mitchell is a priority in Calgary, you’re not paying attention. When Mitchell has time he is picking every team in the CFL apart like no other quarterback can do in this league. John Hufnagel has seen some of the struggles his teams have gone through without Mitchell behind centre.

LB Fraser Sopik (23) – A very promising rookie season likely has plenty of general manager’s attention for a player that could be making his way into a larger role in the Stampeders defence. If he adds a few more pounds as he matures in the CFL, the Stampeders would be thrilled to keep him developing at his current trajectory as a legit Canadian starting linebacker or safety.

WR Greg Ellingson (31) – Five straight 1,000-yard seasons. Trevor Harris is still the guy. Several wide receivers not under contract for 2021. There is no reason to let Ellingson walk because he’s still the best they’ve got. 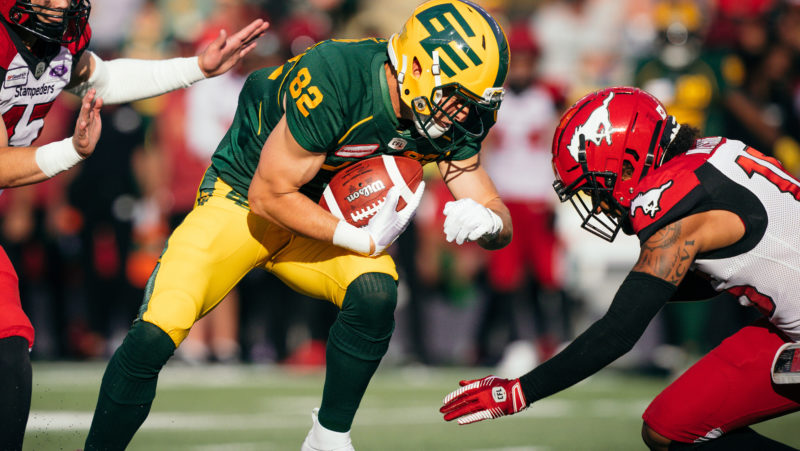 OL Matt O’Donnell (31) – When healthy, O’Donnell is a monster for the offensive line in Edmonton. He’s consistently the team’s best offensive lineman, so why would you want to see him playing anywhere else?

OL Joel Figueroa (31) – Last season’s offensive line was horrendous to start but started to turn around in the back half of the season. They’ll want to carry that momentum into 2021 with Mike Reilly needing a lot more time to find players like the aforementioned receiver.

Isaiah Guzylak-Messam (25) – In his second year in BC, you saw Guzylak-Messam blossom into a regular starter on defence. He cut his teeth showing his prowess on special teams to sniff out the ball carrier and carried that talent through to picking up 37 defensive tackles in 11 starts. Those young talented Canadians are good to have around for a team trying to rebound and rebuild.