Morris: Lions will have many options for a GM hire

The BC Lions won’t need to look any further than their own front office to fill the vacancy created by the sudden departure of general manager Ed Hervey.

Neil McEvoy, the Lions’ director of football operations, Geroy Simon, a CFL Hall of Fame receiver and Rick Campbell, hired last December as BC’s head coach, all have the credentials and experience for the job.

The GM’s job was left vacant when Hervey announced earlier this month he was stepping down for personal reasons. Team president Rick LeLacheur has already said McEvoy and Campbell will work together to “ensure continuity in football operations.”

McEvoy has spent 25 years in the Lions’ organization, the last five as director of football operations. The Surrey, B.C. native started in the ticket sales department, spent time in media relations, then moved into player personnel. His name has been connected to other GM jobs, including the Montreal Alouettes.

RELATED
» Campbell on Lions’ front office: ‘We have a lot of pieces of the puzzle in place’
» MMQB: Bo Levi Mitchell looks to the future during CFL pause
» Vote now for the All-Decade Team presented by LeoVegas 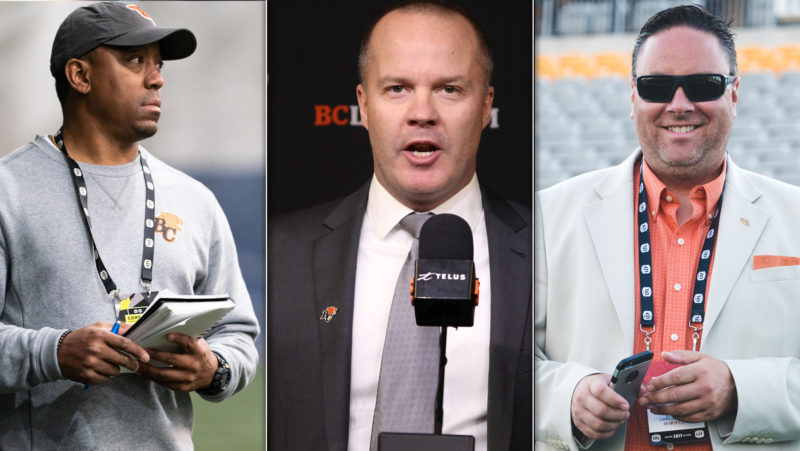 “Neil has paid his dues,” said Suitor. “He’s worked with the like of Wally and other really top notch football people. His background with the Lions really strengthens his resume.”

Simon would bring both name recognition and a football pedigree to the GM’s role.

A six-time CFL All-Star and the league’s Most Outstanding Player in 2006, the Johnstown, PA., native is currently BC’s director of global scouting and US regional scout. He’s spent six seasons as a member of the Lions’ football operations staff after a 15-year career with Winnipeg, BC and Saskatchewan that saw him make 1,029 catches for a CFL record 16,352 yards and 103 touchdowns.

Suitor said Simon ticks several boxes for the GM job. He would have the respect of players on the field plus the personality to help promote the CFL in the media while selling the league in corporate board rooms.

“He’s a guy who really understands the new players, what their different needs are,” said Suitor. “Geroy has grown up in the new culture. He understands that and can communicate with the players.

“He has the great name recognition when he walks into board rooms. If it’s a corporate angle, he commands your attention because of his resume as a player.”

“I think he has real quality people right within the organization. It looks good on the team to hire from within. I think they have the guys that can get it done.”

Campbell has spent 20 years coaching in the CFL with Edmonton, Winnipeg and Calgary. Most recently he led the Ottawa REDBLACKS to a victory in the 2016 Grey Cup in the team’s third year of existence.
Having just hired Campbell as coach, the Lions would probably offer Campbell the GM job only if he agreed to take on both roles.

While Buono and Calgary’s John Hufnagel have both been successful in the dual role, Suitor said it’s not an easy job.

“I’m not sure Rick is looking for both,” said Suitor. “It’s an awfully difficult dynamic to do both.

“It takes a certain type of person to be able to negotiate a contract then give that pre-game speech.”

One person who said he’s not interested in the job is former Lions quarterback Travis Lulay.
Lulay retired as a player In 2018 after 10 seasons with the Lions. He spent a season in the team’s corporate sales office before leaving the franchise in May to work in the family’s financial planning business in Stayton, Ore.

Other possible candidates include Jeremy Snyder, Ottawa’s assistant general manager and Jean-Marc Edmé, the REDBLACKS director of player personnel. John Murphy, Toronto’s vice-president of player personnel, has spent over 16 years in the league working with Saskatchewan, Calgary and Winnipeg.

Chris Jones, who led Edmonton to a Grey Cup and held the coach-GM job with Saskatchewan, could be interested in returning to the CFL after a stint with the NFL Cleveland Browns.

With questions still swirling about when the 2021 CFL season might begin, LeLacheur is in no hurry to name a replacement for Hervey.

“We’re not going to hire a GM right now,” he told TSN 1040 Vancouver radio. “Right now, we have a full roster of players who were scheduled to come to camp last May.

Suitor said it makes sense for LeLacheur to do his due diligence on anyone who applies for job but believes the best candidates might be in offices just down the hall.

“I think he has real quality people right within the organization,” said Suitor. “It looks good on the team to hire from within.

“I think they have the guys that can get it done.”

Alberta’s Ajou making a name for himself at Clemson
Happy Halloween!: Alouettes get spooky