You couldn’t blame a guy, could you?

You couldn’t blame guy who’d won two Grey Cups during his career, and a Most Outstanding Offensive Lineman Award at the age of 36 – and who’d subjected his body to the brutal rigours of thirteen seasons of front-line football battles – if he took a cancelled season as a cue to ride off into the sunset. Could you?

But that is not what veteran tackle Chris Van Zeyl has done, not after signing a new deal with the Hamilton Ticats. He’s playing on. Not feeling old, not feeling creaky. All he’s feeling is football hunger.

At 37-years-old, and despite a career that has seen him face his fair share of major injuries – and lingering ones – as well as snap after snap after snap against some of the most ill-intentioned defensive lineman the game has ever seen, Chris Van Zeyl will play on.

Invigorated by a year off from football, Van Zeyl says he is still driven. Driven by a personal desire to keep suiting up, and by thoughts of helping to bring a championship to the city of Hamilton and to the Ticat teammates he loves.

“The thought does cross your mind every now and then, whether or not you still want to put yourself through the gruelling off- season, never mind the season,” he says, before adding that he is nowhere near calling it quits.

“For me, my love of the game and everything that it represents in my life, far exceeds the pain and all that. So I’m gonna play until it’s not fun for me anymore and that’s really the deciding factor.”

The big right tackle is not so big these days, after having dropped a lot of his playing weight, though he wasn’t trying to. Without the need to train so much, without the need to maintain the heft that can make an offensive lineman a little tougher to go through or around, Van Zeyl just naturally shed the pounds without really realizing it.

“I ate like a normal human being for a few months and people started telling me I was looking really skinny,” he says, chuckling. “I found out I’m an ectomorph.”

Van Zeyl got down to “about 273 pounds,” last October, which would put him about thirty or so pounds below his usual playing weight of between 300 and 310 lbs. He’s on the way back now, closing in on 290 as he hits the gym and ups the protein in his diet. Chicken and peanut butter seem to be playing a big role in that.

Life without a CFL season is not what he would have chosen, of course. But a year off might not have been such a bad thing for a veteran lineman. There’s been a sort of physical rejuvenation.

“I’ve never been in that scenario before where you didn’t have football for a year,” Van Zeyl says. “So the body feels incredible ‘cause you lose a bunch of weight and you take all that load off your joints and whatnot.”

“And then you go back to training and, honestly, I would have never expected my body would have felt as good as it has in the early parts of this training. I still feel really good.”

As well as reclaiming the pounds, Van Zeyl is back in the gym, adding weight-training to the cardio workouts he never did give up, running in and around his neighbourhood in Burlington, Ontario.

“I’m very motivated,” he says of his preparations for a season that he desperately wants to come. That motivation, he says, gets fuelled by a number of things, including a personal desire to keep performing at a high level, in part because he feels that good play can be a way to pay tribute to all the impactful coaches and teammates he’s had over the years. 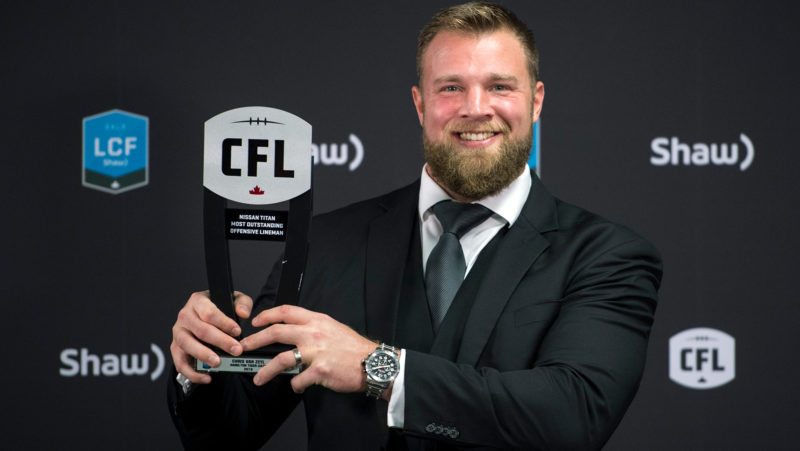 He’s mindful of his journey and those who helped him all the way along it, most notably his wife, Kimberley, and his parents. They were very important, Van Zeyl says, especially back in the days of being “buried on the depth chart” as a rookie with the Montreal Alouettes and as a sophomore with the Toronto Argonauts.

It’s worth remembering that, while Van Zeyl became known as a stalwart offensive lineman over eleven years with the Argos, he began his career as a defensive lineman when he broke into the league.

Flipping over to the other side of the line of scrimmage did not come easily, and Van Zeyl says he tries to remain aware of the people who helped him in the transition, and in his growth over the years that followed.

“If you put blood, sweat and tears into me, I’m going to give it right back to you,” the three-time CFL all-star says. “That’s kind of what I’m doing at this point, I think.”

And there’s something else.

“I love my teammates,” says Van Zeyl. “I want to put in everything I can to make sure that they get a little closer to that Grey Cup.”

Van Zeyl knows the joys of drinking from The Cup, and wants that for his mates. There’s a large number of veterans on the Hamilton roster who’ve never had the pleasure.

“That was a great group of guys to play with,” he says of the team that fell to Winnipeg in the 2019 Grey Cup Game, “and I know we’re kind of getting the band back together.”

“I know what I want,” he says. “And I want it for the right reasons, I think. I want to do this for the city and for the people that are around Hamilton. And, of course, my teammates.

That’s the immediate goal for Van Zeyl, but I wonder if there might be more. When I inform him that hall-of-famer Miles Gorrell played until he was 41 (or was it 42?) he laughs.

“Oh, that’s awfully ambitious,” he says. Then a slight pause. “But I’m not gonna say it’s not possible.”

VAN ZEYL PLUGS INTO THE COMMUNITY

Van Zeyl is currently working on an electrical apprenticeship, a four-year process that he began around the time the 2020 CFL season was cancelled. “I’m loving it,” he says, enjoying the hands-on practicality of the job.

He’s also a realtor and that’s a job that has taken him into the city quite often, leading him to get involved with the United Way in an upcoming charity endeavour to aid the homeless.

“I work, predominantly, in Hamilton,” says Van Zeyl. “And I know the situation. I see it every day. There’s a lot of people out there suffering and COVID has not made it any better.”

The “Sleepless In Our Cities” event will see Van Zeyl spending a night in his car, in mid-February, raising money and awareness for the United Way’s homelessness support programs.

“There’s lots of people that don’t have all the amenities,” says Van Zeyl. “I feel like it’s the right thing to do and I’m proud to be a part of the program.”

“To be able to do this with the United Way and be a part of giving somebody a chance on some of these cold winter nights, I’m all for that.”

Check out the Ticats’ website the first week of February to find out more.