Kurtis Rourke no stranger to following in brother’s footsteps

It’s almost impossible not to compare brothers Nathan and Kurtis Rourke with each other.

They have the same last name. They play the same position. And they both don the same jersey, albeit a different number is printed on their chests.

However, when comparing the two on the field, their styles of play actually couldn’t be more different. Kurtis’ strength is in his arm, while Nathan’s in his feet.

“I’ve definitely been compared to him in having a stronger arm than him and he’s been more allusive or agile, quicker with his feet and everything like that as he showcased for the last three years here (at Ohio),” Kurtis Rourke told members of the media during a conference call in November.

“That would probably be the biggest difference. I grew up more as a pocket-passer and as I’ve been getting older I’ve been trying to work on my feet and being able to move around more and I think he, since he was younger, has been able to do it all.” 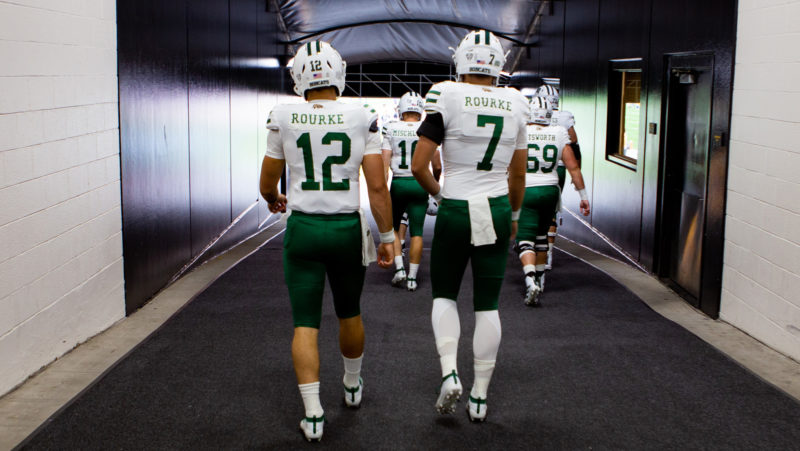 After transferring to the school, Nathan became the Bobcats’ starting quarterback in 2017. He played in 39 career games and established himself as a threat on the ground and through the air. He amassed 7,475 passing yards, 70 passing touchdowns, 2,639 rushing yards and 49 rushing touchdowns while leading Ohio to three consecutive bowl wins and exited as the MVP of the Famous Idaho Potato Bowl in 2020.

In his senior year, he received first-team all-MAC honours after throwing for 2,820 yards and 20 majors while also rushing for 867 yards and 13 scores. That’s also the year that Kurtis joined Ohio and became his brother’s backup.

They ended up in the same place but pair walked down different paths to get to Ohio. Nathan went to play in at Edgewood Academy in Alabama following his junior year at Holy Trinity in Oakville, Ont., then played a year of junior college before getting his offer from Ohio. Kurtis, on the other hand, travelled to Alabama with his brother and completed 10th grade there before coming back to Holy Trinity to finish off his high school career, which included a fifth year, before receiving his offer to play at Ohio.

Kurtis played soccer and high school basketball but it wasn’t until his older brother picked up a football that Kurtis decided he wanted to play too. He saw Nathan throwing around the pigskin and thought, ‘maybe this is for me too.’ He was right, as he ended up liking the game, chose to pursue it and eventually ended up on the same roster as his big brother.

“Getting me settled in, not even just on the field, just off the field and making me feel this is how it goes. Teaching me how to be a good college student in that way. He’s really set me up for my next, however many years I’m here for. He was really helpful in teaching me and helping me know what college life is like. Without him here, it’s tough, but we have to move on. He’s taught me a lot of things and I’m just hoping to bring that out over the next couple of years.”

Kurtis has played in four game so far this season, completing 30 of 44 passes for 386 yards and three touchdowns. Even though Nathan, who was taken in the second round by the BC Lions in the 2020 CFL Draft, isn’t with him at Ohio anymore, he’s still in contact with his little brother, sending tips and encouragement after every game.

“I talk to him just like any normal brothers would,” said Rourke. “He talks to me about the game. Even this last game he talked to me about (it), he kind of coached me a little bit, he said, ‘you know, you need to start looking at this in film because you’re being a little lazy on the field or stuff like that.’ He’s just being what a normal brother would be, and I couldn’t ask for anything else.” 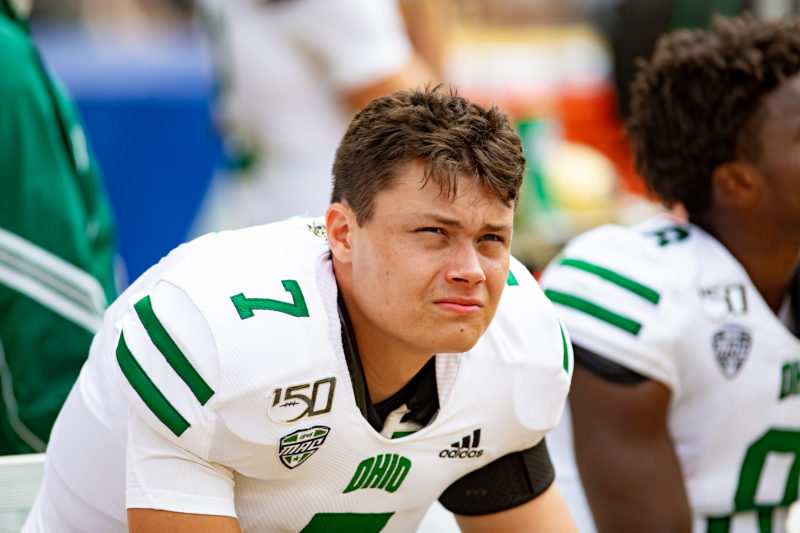 Playing on the same team as his brother was, of course, a great experience for Kurtis. The support, the family ties, and the intricate knowledge he gained was something not a lot of football players get to have. Along with the good, there was one part of following in the footsteps of his brother that made things a little more difficult for the younger of the Rourkes.

Once the six-foot-three, 211-pounder got to Ohio, felt like he had to prove that he belonged there and he didn’t just get the job because of his sibling. He wanted to let himself, and others, know that he is good enough to play at a high level and continues to try and prove himself to this day.

“There’s definitely a lot of things that I want to prove, personally and to other people,” said Rourke. “Every time Nathan has done something, been on a team, whether that’s Burlington Stampeders, through high school, I’ve come behind him just because I’m the younger one.

“It’s something that I’m used to, having to show people that I’m not just good because of my brother. It gives me extra motivation to show more of what I can do and all the work that I’ve put in. Nothing’s changed since I got to Ohio, I’ve had to do the same thing. A lot of people were doubting my abilities when I got here just of me being Nathan’s brother. I wanted to show them that I’ve got some talent of my own too.”