Josh Palmer going the extra mile to get to the pros

Hard work is something that Josh Palmer is all too familiar with.

While he was at the University of Tennessee, he went above and beyond, spending time after a full day of practice and running routes refining his craft.

He’d put in the extra work on the jump machine, which was usually an extra 30-45 minutes a day, using his strength and length to practice high-pointing the ball, something that would eventually become a key aspect of his game.

“I built habits and I just build reactions to how different balls come so in the game I can’t think,” Palmer told members of the Canadian media during a video conference call last week.

“I don’t have time to think, you just have to react. That’s what I try to force my body to do.”

RELATED
» O’Leary: Pier-Olivier Lestage chases pro dream through the pandemic
» Steinberg: ’21 draft set to be more interesting than ever
» St-Juste showing he can tick all boxes at pro level 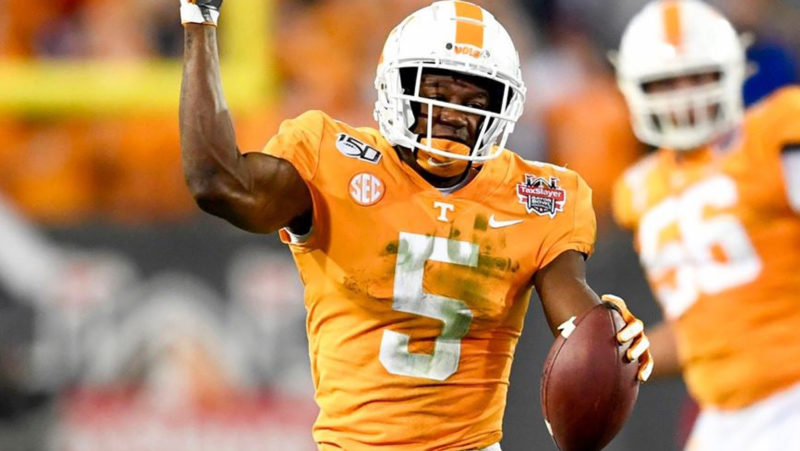 Josh Palmer was ranked No. 2 on the CFL’s Central Scouting Bureau winter rankings (University of Tennessee)

Palmer was the second ranked prospect on the CFL’s Central Scouting Bureau’s winter rankings, just behind Iowa offensive lineman Alaric Jackson. He’s also a top prospect to get selected in the 2021 NFL Draft.

The six-foot-two, 210-pounder is one of a number of Canadians that have made an impression south of the border in the NCAA. Including John Metchie, who Palmer believes could be a top prospect in the coming years.

“It is truly a blessing to be amongst the group,” Palmer said when asked about the group of Canadians finding success in the U.S. “Coming from Brampton, I don’t really know a lot of guys besides myself and John Metchie at Alabama. We grew up together. It’s great to be on the front lines and just to be able to create a movement and show talent in the city.”

Palmer also couldn’t help but notice what fellow Canadian standout Chase Claypool did during his rookie season with the Pittsburgh Steelers and take inspiration from it.

“He had a phenomenal year (in the NFL),” Palmer said. “I didn’t really pay attention to him in college just because I have my own team that I had to pay attention to. I always heard his name called and it’s great to just see him flourish in the NFL, it’s inspiring.”

In 2020, Palmer’s senior year, he hauled in 33 passes for 475 yards and four touchdowns. Over his collegiate career, he’s played in 47 games and amassed 99 receptions, 1,514 yards and seven major scores. He earned an invite to the 2021 Reese’s Senior Bowl and impressed while showing off his elite route running skills. He was also invited to 2020’s Reese’s Senior Bowl after leading the team in both receptions and receiving yards per game.

The dedication he has for the game of football started all many years ago when the Brampton, Ont. native decided to leave his home town and transfer to St. Thomas Aquinas High School in Fort Lauderdale, Florida for his final two years.

“I knew that, what I wanted to achieve in order to play college football and professional football, that I needed the exposure,” Palmer said of his move down south. “Moving to St. Thomas was definitely a business move at a young age with my family.”

Before his move to Florida, where he said he played against a lot of talented football players that were key in his development, Palmer was a multi-sport athlete. He played soccer and basketball in and around the Brampton area before he made the decision to just focus on football.

That commitment and all of the hard work along the way is what has gotten Palmer to where he is today as he hopes his hard work will pay off and he can play at the professional ranks.

“I feel like I have to look at it as both,” he said when asked if he approaches football as a game or as his livelihood. “At the end of the day, it is a game but also this is what you do for a living. It’s your job, so you have to approach it as such. (You have to) put in the extra work, it’s not a normal nine to five, it’s the one who works the most that will have the most success.

“Just being on your A-game. I feel like I wouldn’t be putting this much work into it if I just thought it was a game.