Ferguson: Uncovering the stories from QB throws in 2019

When the pandemic hit and lockdowns began, it was a shock to the system for everyone.

What will I do? How will I fill the time? Why can’t I eat all day, not go to a gym and stay fit?

I like to keep busy, so I rediscovered my love for reading to fill some time, when it exists between diaper changes and calming a newborn. There were a number of books I had noted over the last couple years in case I ever had the time to attack them. Some about football, some about nature or history but one was a must-read immediately for me.

Sprawlball by Kirk Goldsberry is the story of one man’s quest to track every shot in the NBA and determine their value. Besides Goldsberry being a fantastic follow for a hoop head like myself on social media, I was fascinated by the precision of his work and – as a visual learner – the simple ways he was able to tell a *basketball* story using numbers.

In a weird way, unknowingly the theory behind our work has overlapped. In 2016, I began calling Hamilton Tiger-Cats games on radio and became frustrated by the lack of unique, tangible data to tell *football* stories with using numbers. As a university quarterback and geography student I couldn’t help but see the overlap from classroom to film room and have always wanted to take the study of Canadian football geography further.

As a result, in 2017 I began tracking every CFL snap, for every CFL team with a particular eye on passing metrics in hopes of understanding not just the entry level question of “who is good and who is bad” but WHY.

In the opening pages of Sprawlball, Goldsberry displays the efficiency of NBA shots by depth of attempt. Well, I have the same data for three seasons of CFL play so I decided to spend a couple days peeling through every throw from the 2019 season and see what unbiased story they told us.

You don’t have to spend endless hours tracking throws to understand that closer targets are easier to hit. Anybody who has thrown a pigskin in the backyard with family at Thanksgiving can tell you that, but just how connected are accuracy and completion percentage?

As expected, the two are tied at the hip. By grading every throw from zero to five on the following criteria, we get an accuracy grade that both comments on and contributes to a CFL quarterback’s tendencies and abilities.

1 – Really off target, no chance for the intended receiver.

2 – Bad spot, needs to be better to give receiver a chance.

3 – Good spot. Typically accurate enough to be completed but could have helped receiver more.

4 – Exactly where it needs to be. Best case scenario.

5 – Exceptional throw. Unicorn toss that make you jump out of your seat.

Next up, a look at production grade as follows:

1 – Offence has to leave the field (Turnover on downs, punt or field goal)

When we pair a production grade with pass attempt percentage by depth we get this. 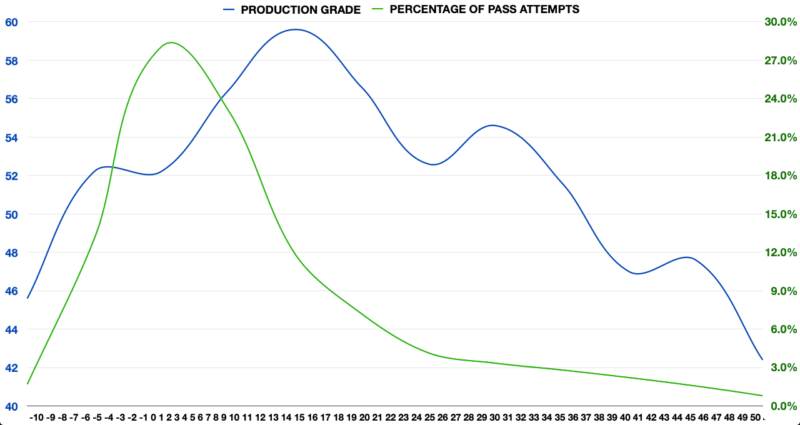 THIS right here is always my main takeaway from studying CFL passing: This game rewards targets deeper than offences prefer to attempt.

I understand each throw comes with specific context of down, distance, score, clock, field position etc. but the fact remains that over the 6000-ish throws in 2019, the best value was located around 15-yards in the air, while the vast majority of modern CFL throws happen at or near the line of scrimmage, despite the minimal return on investment.

What does this all mean? I believe we are completing passes because it feels good, not because it supports the ultimate goal of offensive production. If the goal is to move the ball and score, those who push the ball somewhere 10-20 yards downfield with consistency will be rewarded more than teams who refuse to do so.

Think Vernon Adams Jr. for Montreal in 2019, Mike Reilly for Edmonton in 2018 or Bo Levi Mitchell for much of the past decade.

The first two charts are league-wide averages which tell a story about the CFL, but what about individual team dynamics? That’s where the study of football geography really gets interesting as influenced by individual coaching philosophies and playbook designs.

I chose to compare the top and bottom of quarterbacking efficiency in 2019, the Riders and REDBLACKS, respectively. First, Saskatchewan: 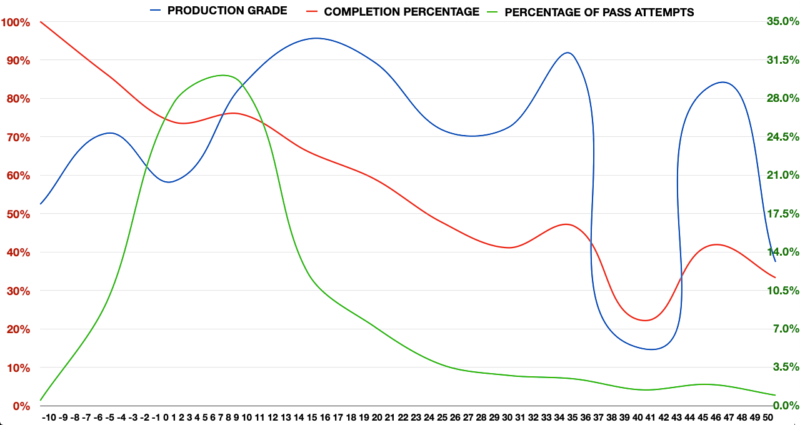 High completion percentage near the line of scrimmage and three distinct layers of offensive production defined Cody Fajardo’s first year at the helm, but it was consistent and efficient throughout. The REDBLACKS meanwhile paint a much different picture. 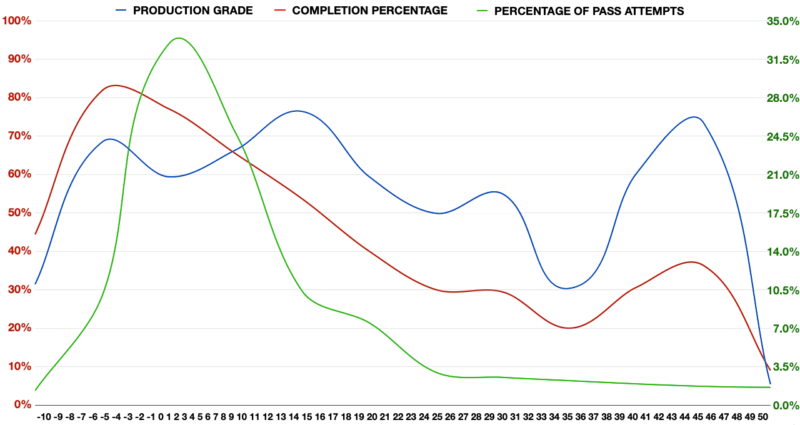 Plenty of passes at the line of scrimmage with a below average completion percentage, especially in the high value 10-20 yard range. Every Ottawa fan already knows the QB struggles that were endured last time we saw CFL football played, but what they might not know is that new starter Nick Arbuckle had one of the smoothest passer profiles in the CFL during Calgary’s 2019 season. Undoubtedly a sight for sore eyes in the capital when we return to action. 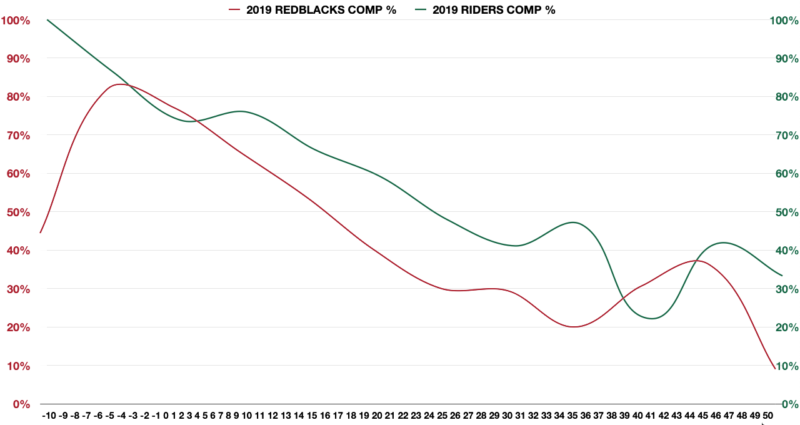 The question for me now becomes what will these tendencies, success rates, accuracy and production grades look like when we return from a full 18-months without game action for the games best passers and will the further study by teams of expected return of certain throws create a smarter offensive attack in the same was Kirk Goldsberry’s Sprawlball helped shape the deep ball evolution of the NBA?

Time will tell, and we’ve got plenty of it, so go grab a good book.