Ferguson: A look at 2020 FA signings back up for grabs

CFL free agency is a monster. It’s a reappearing beast that each winter carries our Canadian Football interest in lieu of the real thing. It’s a temporary distraction from the early sunsets, colder temperatures and endless windshield scrapes that define most Canadian winters.

After a long summer of longing for even the smallest scrap of positive and meaningful CFL news to capture your attention, free agency has never been more welcome as fans across the country see their eyes widen with every name of value up for grabs.

The fantasy football game that is CFL free agency can be counted on for two things:

While many focus on February and the dreamy matchmaking game, I’m always more intrigued to see which players CFL teams refuse to let get more than a few weeks into December without making them an offer they can’t refuse.

A few years ago in Hamilton that was Sean Thomas-Erlington, who once again finds himself out of contract entering 2021. He was a focus then for the Ticats and one of the first deals done. Talking to some Hamilton coaches it quickly became apparent from watching back the previous season’s film they knew Thomas-Erlington could not in good conscience reach the open market.

Thomas-Erlington had shown promise in limited reps and left Hamilton wanting more because he had performed on-field, but what would his free agency process have been like coming off a season-ending injury or a season-erasing pandemic?

Sean’s situation is just one example of the altered landscape CFL players prepare to embrace as they head towards an off-season unlike any other to chase the sour shot that was an empty summer.

First let’s take a look at which teams have the most up for grabs and those who have a majority of their 2021 roster secured. 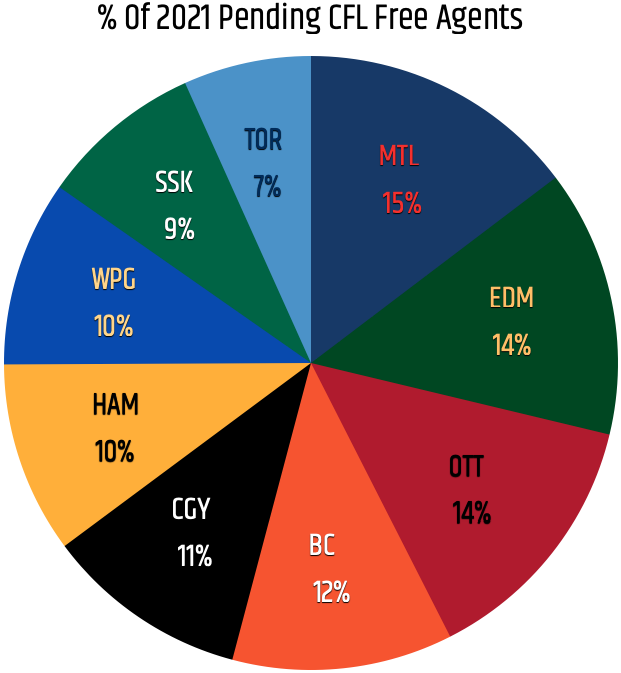 With a whopping 48 names, Montreal leads the way in bodies up for grabs. Names like veteran DE John Bowman, talented Canadian OL Tyler Johnstone and team heartbeat LB Henoc Muamba are up for grab. There is plenty of potential for change but with Khari Jones back and a successful 2019 playoff push, don’t expect a grand overhaul in Montreal.

Even Toronto, who has the fewest names available (22) has notable players up for grabs including special teams menaces Llevi Noel and Nelkas Kwemo, talented pass catchers Juwan Brescacin and Natey Adjei and destructive pass rushers Craig Roh and Alex Bazzie.

The reality is in CFL free agency with 327 names available to start the months long process, there is something for everyone, but many of these names are re-entering free agency without having ever played a snap for the team they signed with last year. 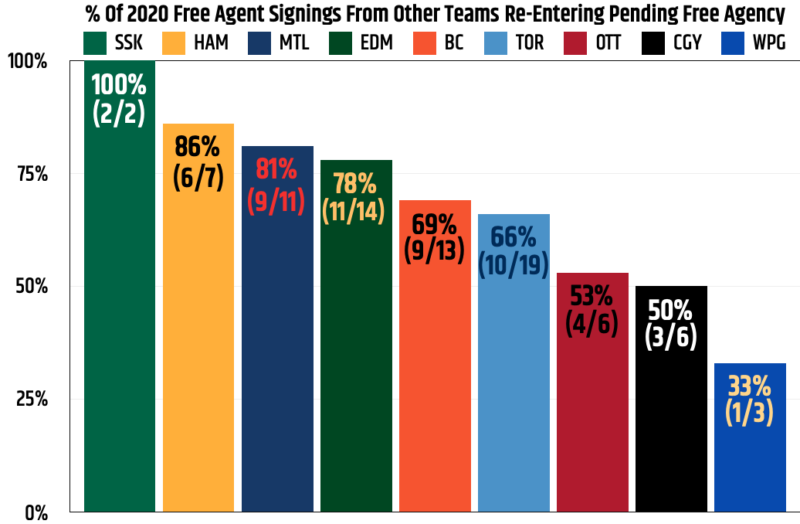 Does this lead to some cases of buyers remorse with players choosing to sign somewhere else without ever having put their ‘new,’ now ‘old’ helmet on, or will many re-sign quickly in December and try to act like the previous 12-months were a bad dream worth ignoring?

A challenge to that possible flood of signings could be the salary cap implications of a bounce back season for the CFL on-field and financially. With – presumptively – less to go around for all, many players will try to sign quickly, but will teams match the motivation to move quickly?

Your guess is as good as mine.

Edmonton leads the CFL in players signed from other teams last February who re-entered pending free agency this week (11) while Winnipeg has just one such player to convince re-signing is the right move in DL Tobi Antigha.

While Toronto has the fewest free agents up for grabs, I believe they will actually define this strange process more than any other team in 2021.

Nearly half of those total pending free agents were signed from other teams last year and haven’t had a chance to don the double blue yet. That’s a rate well above league average. 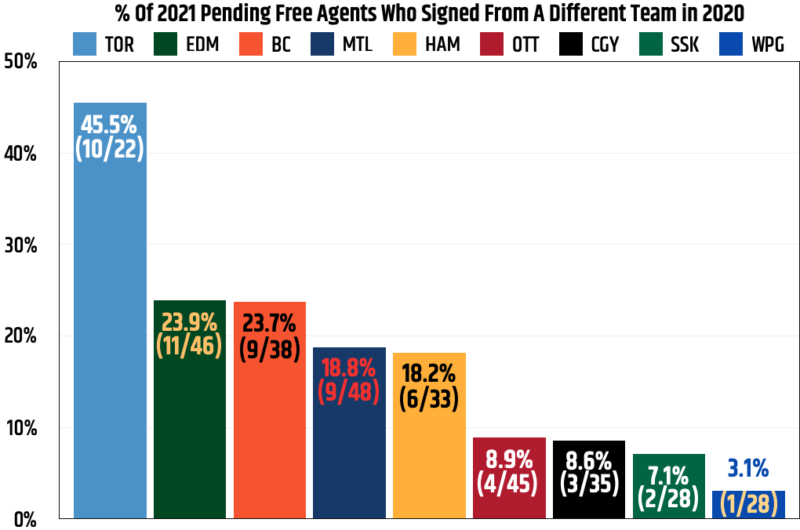 CFL free agency in 2021 is as much an exercise in trust, relationships and blind faith as it is an equation is puzzle pieces creating the perfect attack come June.

Sit back and enjoy the show, we’ve all earned the distraction.