Elizondo thrilled to work with familiar faces in Edmonton

TORONTO — It’s been a whirlwind week for Brock Sunderland and the brass for the Edmonton Football Team.

Just weeks away from the opening of free agency on Feb. 9, head coach Scott Milanovich resigned from his position, leaving the team looking for his replacement during one of the most stressful stretches of the off-season for a front office.

With a need to fill their vacancy quickly, Sunderland and the organization were able to find their man in quick order, officially naming Jaime Elizondo as the 23rd head coach in franchise history on Monday.

“(Jaime) and I met back in 2016 in Ottawa and immediately connected due to our passion for football and also how we feel building a championship program is done,” Sunderland said. “…He’s a tireless worker who was truly the first one in and the last one out. Along with his passion, work ethic, and creativity as a play-caller, Jaime is a great leader who understands that football and the culture of a team is about people first.

Along with his head coaching duties, Elizondo will also serve as the team’s offensive coordinator and quarterbacks coach. 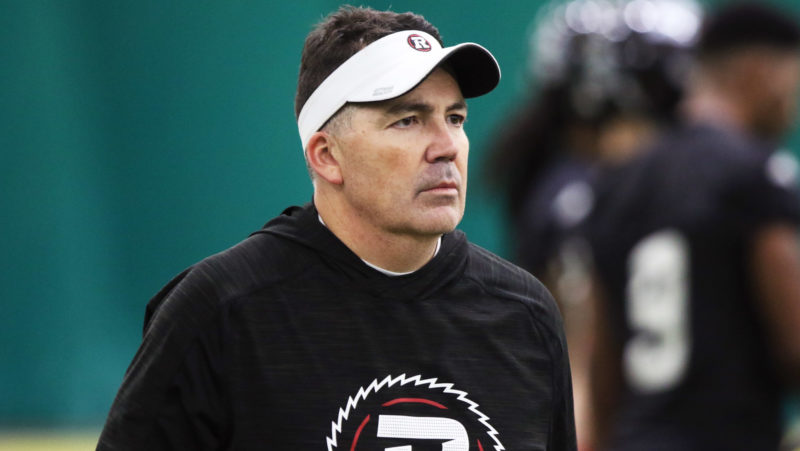 Elizondo has had several stints in the CFL, starting as a receivers coach with the Montreal Alouettes in 2008. Following a one-year stint with Syracuse University, he returned to take a job as the receivers coach and offensive coordinator for the Toronto Argonauts.

His most recent stint in the league came with the Ottawa REDBLACKS, where he served as the team’s offensive coordinator from 2016-2018. During that time, he helped the organization capture its first championship in 2016 while also appearing in the 106th Grey Cup in 2018.

“Brock reached out earlier in the week, and it was a call out of the blue because — to be transparent and honest with you — since the blockage happened a year ago, I’d kind of resolved myself to maybe this wasn’t going to happen,” Elizondo said. “The last week has been insane but Brock has been great through the process. I couldn’t have had a better advocate or a better person working on my behalf.”

In Edmonton, Elizondo reunites with quarterback Trevor Harris, whom he coached while with the REDBLACKS. He also inherits one of the most exciting offences in the league. The organization brought back superstar receiver Derel Walker in January and also agreed to terms with pending free agent pass-catcher Greg Ellingson.

There are also a number of individuals on Edmonton’s staff who Elizondo is familiar with from his time with the REDBLACKS, which should make for a smooth transition into his new position.

“One of the things that made this so attractive was my previous relationships, not only working with Winston October and also John McDonnell but also with Noel Thorpe,” Elizondo said. “I think that’s a huge component to be able to step into a situation where you are going to wear both hats.

“…I don’t think it hurts to have Trevor Harris as your quarterback, a guy that I’ve worked with before and is also really a coach in the room as well. So I think those pieces will help pull this thing together.”

The team was able to make it into the playoffs in 2019, earning the crossover playoff spot. They beat the Alouettes in Montreal before falling to Hamilton in the East Final.

Last off-season, however, they took a hit on the defensive end in free agency, losing defensive backs Josh Johnson, Monshadrik Hunter, Arjen Colquhoun, and Tyquwan Glass along with linebackers Larry Dean and Don Unamba. While they did make up for some of those departures, those were some big names to have to find replacements for.

There’s still work to be done over the coming weeks, but with a coach in place, Elizondo can now work with Sunderland to help shape the team’s roster for 2021 the way they see fit.