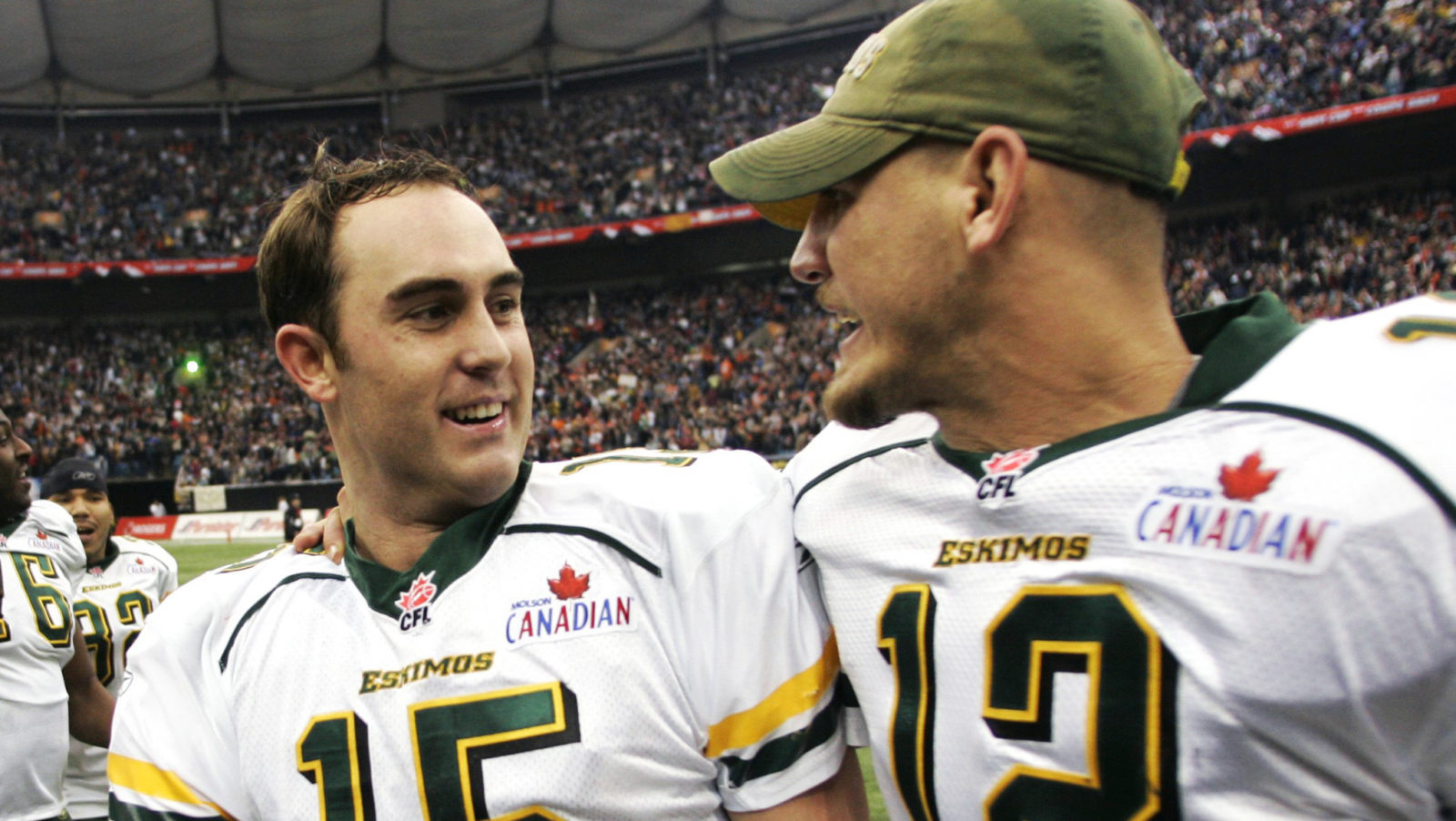 TORONTO — It was one of the most memorable plays of the 2005 Grey Cup for everyone except the man who actually made it.

The play was a third down gamble with less than two minutes left in the contest. Ricky Ray tossed a 35-yard pass to Derrell Mitchell on a corner route, bringing Edmonton to the Alouettes’ 15-yard line. Four plays later Ray rushed into the end zone for the touchdown and following a successful two-point convert, Edmonton took a 28-25 lead.

“Not a whole lot,” Ray admitted to Donnovan Bennett on this week’s episode of The Waggle when asked what he remembered about the play.

“When you’re in the moment, you get the play from the sideline, you relay it to the guys in the huddle and you’re just, in your mind going through the situation and what your read is. I just got the snap and tried to go through my progression, my read. My read took me to the corner route. That’s a play we’ve ran a million times and had a lot of success with. (We) had some great receivers that were great corner route runners and Mookie (Mitchell) was one of those guys.

“I just tried to throw it out there and let him make the play. He made a great catch and kept that drive going. When you’re in the moment you’re just going through your process, not really thinking about too much, just focused on what you have to do for that certain play out there.”

Ray may not have remembered the play clearly but his teammate, Jason Maas, who joined Ray and Danny Maciocia on the podcast, still can visualize what had transpired.

“That play to Mookie, on a corner route, when everyone in the world thought something like that might happen on a third and four and still be able to complete it, such a great play,” remembered Maas. “With all of the pressure in the world on him, and the team at that moment, for those guys to make that play, that’s one of the moments that sticks out to me that propelled us on for the rest of the game and ultimately winning it.”

“We had probably the best corner route quarterback that you could imagine,” Edmonton’s head coach at the time, Maciocia, explained. “(Ray) had such great touch and such great feel for the routes that I felt quite comfortable running it whether it was with Jason Tucker or Mookie Mitchell. We made a living running that route throughout the number of years that we spent together in Edmonton. I felt quite confident calling it, knowing full well that if we ever got into man coverage, we had an opportunity to complete that throw. We completed it in so many different fashions, whether it came from the slot position closest to the tackle for maybe from the number two position where we ran it with a different receiver, we just always found a way to complete it. I felt pretty confident making that call on third and four, which was our staple play throughout the course of our heyday together in Edmonton.”

The Grey Cup victory didn’t come without some adversity, however. Montreal was able to tie things up with a field goal and sent it to overtime. The teams traded touchdowns in the first overtime series before Edmonton scored a field goal and Montreal wasn’t able to respond with a score of their own and the green and gold were champions.

“It was a resilient group,” Maciocia said, gushing about the 2005 team. “It was a season that had its twists and turns throughout the course of the season. What really comes to mind is the way we came together in the second half of the season, especially in the last couple of regular season games. The way that the locker room was so united and the fact that you have Jason and Ricky in the leadership role that they provided throughout those twists and turns that we went though, especially in the ladder part of the season into the playoffs was something that sticks with me and I’m truly grateful that I was able to cherish it with two outstanding football players, but even better human beings. People that I consider dear friends of mine today.”

After going back and forth between Ray and Maas during the playoffs, Maciocia decided to start Ray on the biggest stage. At halftime, with Edmonton up 10-1, the thought to make yet another quarterback change crossed Maciocia’s mind.

Maas did not want that to happen.

“I remember Jason looking at me and pretty much saying, ‘Don’t even think about it because Ricky will win this one,’” said Maciocia. “And we all know how that turned out and we all know who the Most Valuable Player was in that game. It was Ricky.”

That unselfish attitude was how Maas was as a player. He had a team-first mentality and the only thing that mattered was what was best for the team. That’s what made his decision to stay as Ray’s backup and not take the opportunity to jump behind centre in the biggest game of the season an easy one.

“It wasn’t a difficult decision for me just being that team guy,” said Maas of the interaction he had with Maciocia at the half. “Having the feelings I do about Ricky and Danny and the organization, I felt like it was the right thing to do. I knew my job was to be prepared to play at any moment. Any time you got called on you had to play and had to play at a high level. The bar was set extremely high from Ricky. So anytime I went in, and I felt that pressure to perform at that level. But I knew my main job was to backup Ricky and to be there for him for whatever he needed.”

“The hardest thing not to play in was the Grey Cup,” Maas continued. “I played in a West Final, a West Semi-Final, the only thing I never played quarterback in was a Grey Cup. I think you play your whole life for that moment but I’ll tell you what, I’m so thankful and grateful that Ricky played that whole game and we won. It means just as much to me if I would have went in there.”

That meant so much to Ray, having his teammate give him full confidence and support, as he led Edmonton to a Grey Cup that November evening in Vancouver.

“Jason was the guy that took me under his wing when I first got there in Edmonton in my rookie year,” said Ray. “I really looked up to him and he really taught me a lot about the CFL game and how to play quarterback and how to be a great teammate. To have his support in a situation like that was unbelievable. I’ve been through the CFL for a number of years and most of the time your quarterback room is really good. Guys are supporting each other, you all get along, it’s only been rare that you may have one or two guys that didn’t have the same attitude but for the most part, we’re all trying to help each other.

“To have a guy like Jason to be so unselfish, when he could have had his number called, that’s pretty rare. Most guys would have taken an opportunity like that and did what’s best for them, rather than what’s (best) for the team. Jason’s always been that guy where he wanted to do what’s best for the team whether it was letting another guy play or him playing. He didn’t really care as long, as it was best for the team. To have that character and that example was just a great lesson for all of us and carried me throughout my career in the CFL.”

Burnham: ‘It takes a lot of strength to shrug off discrimination’
Steinberg’s MMQB: Making the case for a few All-Decade exclusions