A look at 5 of Toronto’s defensive neg. list players

With the NFL and NCAA recently kicking off their seasons, CFL fans are reminded how much they love football and how much they’re missing the Canadian game. We’re all craving a little Canadian football content at this stage.

Only 23 years old, McFadden has the skill and the size at six-foot-two and 205 pounds to be an impact player.

The native of Ft. Lauderdale, Florida was an elite defender at Florida State. In his eight-interception sophomore year he won the Jack Tatum Award as the top defensive back in the NCAA. McFadden was also a finalist for the Bronco Nagurski Award that year as the country’s top defensive player. He was an All-American in his sophomore and junior years, before leaving school after his junior season.

After signing with the San Francisco 49ers as an undrafted free agent in 2018, McFadden ended up with the Colts, 49ers again, and Lions in a span of 15 months, before being waived with an injury settlement.

He moved on to play with the Tampa Bay Vipers in the XFL for former Argo Head Coach Marc Trestman. He had a pair of interceptions and three knockdowns in five games before the league ceased operations. One of his picks turned into the first touchdown in franchise history after a 78-yard return.

While not blessed with elite speed, he has a tempting skill set. He has a tremendous knack for finding the football and has very good instincts.

He spent two seasons at Northwest Mississippi Community College, where he was named an All-American, before moving on to Oregon State for two seasons.

The Covington, Louisiana native was a fifth-round pick of the Houston Texans in the 2017 NFL Draft, starting as a cornerback before being moved to safety. He was a final cut of the team a year later and was signed by Dallas, but was among the final cuts in 2019. He played 10 games with the Texans, one more with the Cowboys.

Decoud played in all five of the XFL’s Dallas Renegades games before the league ceased operations.

Like McFadden, he’s tall for a DB at six-foot-three and 208 pounds. He’s a versatile defensive back who is not only good in coverage but can also come up and play in the box.

His last name is pronounced day-COO. He’s 27 years old and is a free agent.

An explosive pass rusher at the college level, Wheeler is Colgate’s all-time leading sack leader with 33, a record that had stood for 38 years. He added 18 tackles for loss last season. He’s a three-time First Team All-ECAC selection and a three-time Associated Press All-American.

Wheeler was a key component of a Colgate team that led the nation by surrendering just 9.3 points against per game and gave up a total of just six points in a seven-game stretch. In one game they held Fordham to minus-50 rushing yards.

He has good size at six-foot-two and 255 pounds. Wheeler was not drafted and has never signed with an NFL team. He was hurt by the lack of a pro day this year due to the global pandemic.

His strength is his pass rushing ability. Explosive off the ball, he’s strong enough and quick enough to be able to beat an opponent in multiple ways.

The St. Louis native has developed into an all-around defensive player, not just a pass rusher.

A talented rush end who by pro standards is still a work in progress.

He’s the younger brother of Chicago Bears star defensive end Khalil Mack. The two are currently both with the Bears as Ledarius signed a contract as an undrafted free agent after the 2020 NFL Draft. He was released by the team but was re-signed on September 14 and is currently on their practice roster. 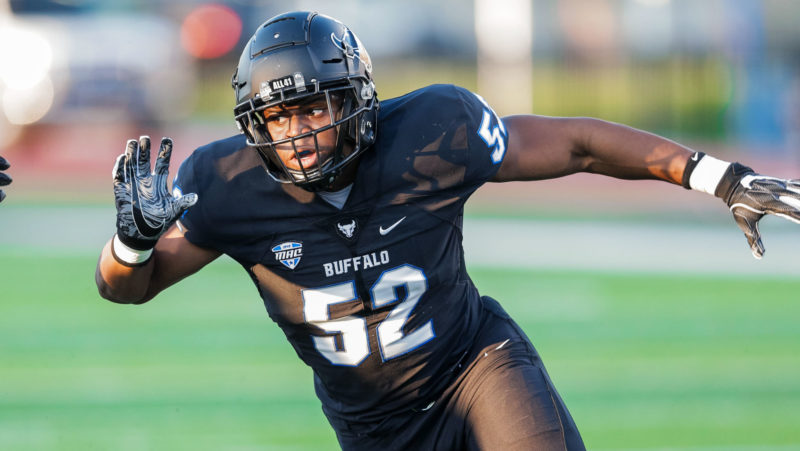 Mack is six-foot-one, 240 pounds and 23 years old. A late bloomer, he didn’t play football in high school because the school didn’t have a team.

His football career began with two seasons at ASA College before transferring to Buffalo. He was named Second Team All-MAC as a senior with the Bulls after posting eight sacks and 12 tackles for loss.

A bit small for the NFL, Mack has a good burst and is quick. How much potential does he have? After starting his career as a linebacker, he played defensive end for the first time in his life last year and finished third in the MAC in sacks, despite being the team’s No. 3 defensive end. The top two players in the conference in sacks were the two Buffalo teammates ahead of him on the depth chart.

To be blunt, Jordan Fehr is an athletic specimen. Last year he ran a 4.45 40, posted a 40.5” vertical jump, and bench pressed 415 pounds. That earned him the third spot among FBS players on The Athletic’s annual “Freaks List.”

A six-foot-two, 230-pound middle linebacker, in his final two seasons with the Mountaineers he amassed 195 tackles, including 109 last year.

Fehr was a national semi-finalist for the Campbell Trophy, awarded to the country’s top scholar-athlete. On the field he was named All-Sun Belt in each of his last two seasons.

The Charlotte, N.C. native knows what it takes to win, as his teams won the conference title in all four of his years at Appalachian St. and went 4-0 in Bowl games.

Fehr has a high football IQ and a great nose for the football. He’s a sure-handed tackler.

He signed with the Vikings in April as an undrafted free agent but was one of their final cuts. He’s a free agent.

Steinberg’s MMQB: 5 storylines I would have kept my eye on
Watch the entire Season 5 of Best in the League