The legend of the 2000 Grey Cup champion BC Lions lives on. It also serves as an excellent reminder: regular season success doesn’t mean a damn thing.

And with the 20th anniversary of that magical run approaching, we thought Grey Cup Unite week would be the perfect time to celebrate a reunion. On Saturday, fans were encouraged to visit our Virtual Den Facebook Page. We were joined by Damon Allen, Sean Millington, Robert Drummond, Lui Passaglia, Jamie Taras, Daved Benefield and Carl Kidd for a re-watch of some of the big moments from that 28-26 win over Montreal. Each one of those guys being a legend in his own right.

Quick refresher. Led by the late Greg Mohns as head coach, the Lions in 1999 finished 13-5 and atop the West Division. With the Grey Cup being played at BC Place, fans were ready to repeat the magical experience from 1994, and watch their heroes hoist the trophy under that old Marshmellow roof. Those hopes were dashed with a 26-24 home loss to Calgary in the Western Final.

RELATED
» Dickenson solidified legacy with ’06 championship
» O’Leary: Tough to overlook the All-Decade second-team
» Ryan Rigmaiden returns to Lions as Director of US Scouting

Damon Allen’s lost fumble with 1:09 to play sealed the Lions’ fate and 1999 was considered a failure. Never mind the fact they tied a franchise record for wins, didn’t lose two straight games all year and hosted their first Division Final since 1987. It was yet another reminder that the regular season doesn’t matter unless you win in November.

So it goes without saying, expectations remained sky-high for 2000. Which brings us, again, to the regular season. Despite having many of their core players return, the team struggled to regain some of that magic.  A pair of lopsided losses to Calgary contributed to a 2-4 start and all but dashed hopes of another first place finish. Two weeks after that, Mohns departed for a position with the XFL’s San Francisco Demons.

After Steve Burrato was promoted to head coach, the squad promptly lost two straight to fall to 4-6. But you could see the group starting to gel. Passaglia’s announcement in October that the 2000 season – his 25th with the club – would be his last also gave the group motivation to make that playoff run a memorable one.

“In the middle of the season, it wasn’t looking rosy,” recalls Passaglia.

“When you look at our roster, there were some great players. Even when Burrato took over, it took a few games before we clicked. The offence just started taking off in late September, early October. You guys were unstoppable,” added the kicking legend when speaking to a few of his teammates in a separate interview.

They closed out regular season play by winning three of four games- including Passaglia’s final appearance at BC Place where he contributed with a one-yard touchdown plunge. Hey, their playoff spot was already locked in and they were afforded the luxury of having some fun for one night before the real grind began.

“Offensively, it didn’t click until we added Jimmy Oliver. The second half of the year, I think I threw for over 3,000 yards. And then our 3D backfield was averaging at least 140 or 150 yards rushing per game. We got on that little pace, and I don’t think anybody wanted to play us. We were trading off with Drummond and the Diesel.”

That’s another great thing about the 200 champions. Receivers like Oliver and Don Blair may have flown under the radar with all of the other great players, but they were just as important to the cause. Taras referenced Blair calling a team meeting at some point about the playcalling and that also serving as a catalyst for the late-season run.

When doing some research for this big project to re-live some of the 2000 glory, I was reminded of a couple of remarkable facts. The biggest was the fact this 2000 team never trailed for a second in each of their three post-season contests, including the Grey Cup. That’s an outstanding feat for any champion, especially one that has to go on the road throughout the playoffs. 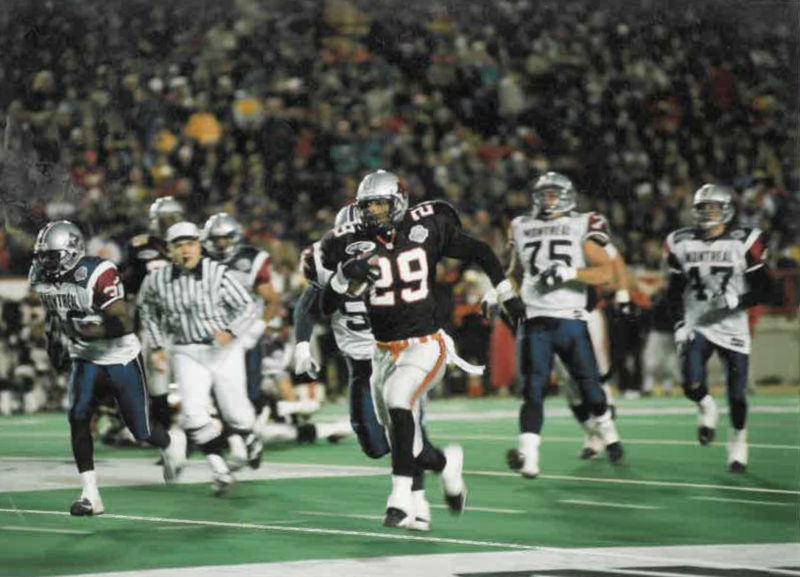 Sure, things got tense in the Western Semi-Final at Edmonton when a 31-14 lead slipped away and the home side was in a position to tie it up late before Sean Fleming’s missed field goal. 34-32 final.

The 37-23 win at Calgary in the Western Final was a complete team effort. Eric Carter’s interception return to put the Lions ahead 21-1 in the second quarter is what really opened the floodgates.

The other big observation was a simple reminder of just how dominant the two-headed monster of Millington and Drummond was in the backfield. Keep in mind, the salary cap wasn’t what it is today. The duo combined for 221 rushing yards in the Grey Cup win while Drummond’s 44-yard touchdown run early in the 4th quarter proved to be a huge turning point.

Re-watching the entire game to prepare for our virtual event had me even more appreciative of what this team accomplished. The Grey Cup win was a classic case of owning time of possession, being dominant on the line of scrimmage and keeping Anthony Calvillo, Mike Pringle and Ben Cahoon in check most of the night.

It still came down to the wire when Chuck Levy broke up Calvillo’s pass on a two-point convert attempt that would have tied the score if successful. The end result was the final field goal of Passaglia’s illustrious career serving as the eventual winning points on the previous drive. What a night. What a run. And further proof that in many cases the regular season means nothing. 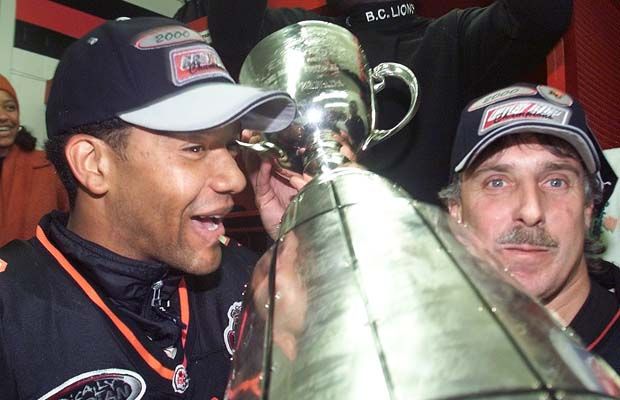 And that brings us again to pro football’s all-time leading scorer. I recall there were whispers Passaglia might back it in after his 1994 Grey Cup heroics. He was 40 at that time and hey, winning it all with no time on the clock and preventing an American team from spoiling the annual Canadian bash. Well, he still went out a champion and was playing at an incredible level at age 46.

In his final season, Passaglia made 91 percent of his field goals (40/44). Sure, he missed three attempts in the Grey Cup, but everyone remembers he made his last. Not every player gets to ride off into the sunset like that. Passaglia and the entire legend of 2000 will live on forever. Regular season record is, most of the time, irrelevant!

“It got to the point where we weren’t even thinking about winning or losing, ” said Allen.

“It was more about, how many points are we going to score tonight?”

We won’t get to watch a live Grey Cup game in 2020, and that hurts like Hell. Yet at the same time, we can look back on the legend and stories of previous champions with a lot more appreciation as we hope for the best that 2021 brings a normal CFL season.