You might know him by the shortened version of his first name (Mike), his initials — MJ — or maybe by the outline of him dunking, a depiction known as “Air Jordan.”

Before winning six NBA titles with the Chicago Bulls and becoming the governor of the Charlotte Hornets, Jordan was a baby-faced freshman at North Carolina, who hit one of the biggest shots on the sport’s biggest stage.

Here are seven of Michael Jordan’s best games in a North Carolina uniform. 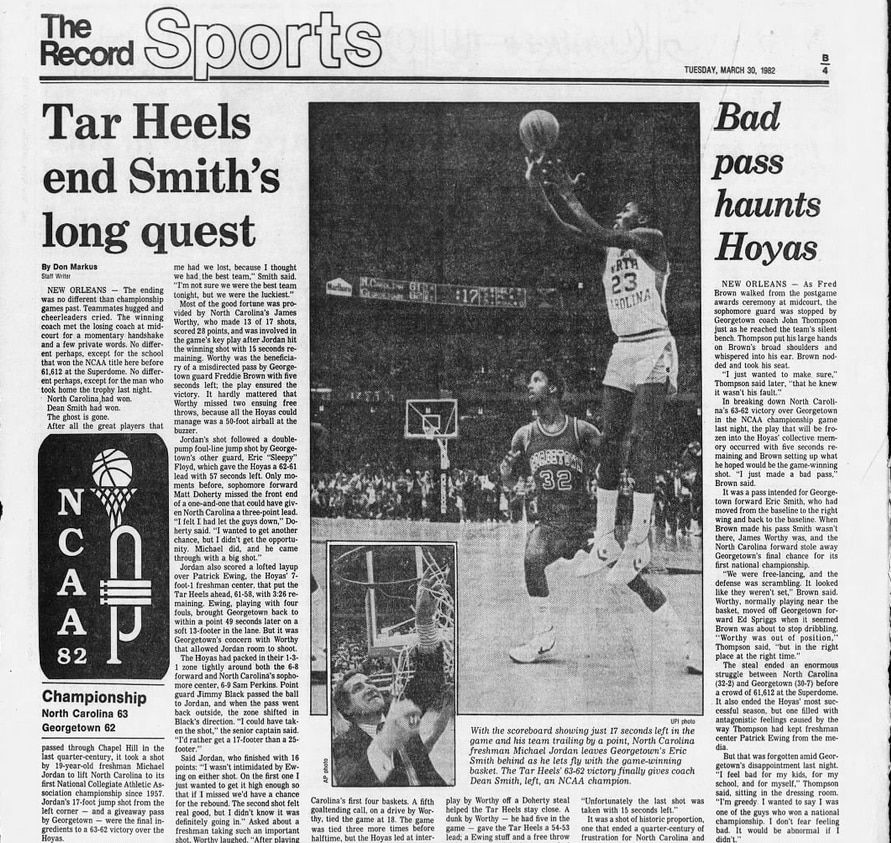 Why we picked it: How can you not? The Jordan legend was born when the freshman’s baseline jumper in the final seconds gave North Carolina its second national championship

Jordan hit the game-winner for North Carolina in the 1982 national championship game against mighty Georgetown and finished one rebound shy of a double-double with 16 points, nine rebounds, two assists and two steals. He finished the 1982 NCAA tournament with 66 points in five games, while playing 173 of a possible 200 minutes.

“Freshman guard Michael Jordan said he saw the winning shot in a pregame vision, but couldn’t watch to see what happened after he arched the real thing with 15 seconds to go in the NCAA championship game,” the Associated Press’ Austin Wilson wrote after the game. “It swished through from 16 feet away, just as it was planned and just as it occurred in his pregame fantasy. The shot gave North Carolina a 63-62 victory over Georgetown Monday night and the national college basketball championship. 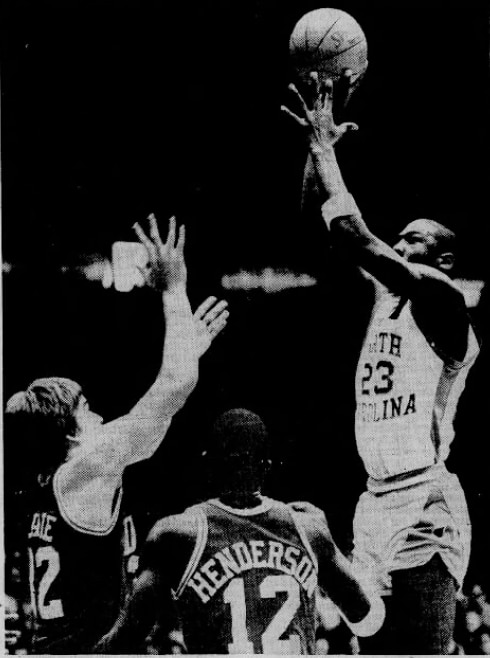 Why we picked it: Jordan scored one of the 10 highest point totals for a North Carolina player against Duke

In the first Tobacco Road rivalry meeting between Duke and North Carolina in 1983, Michael Jordan, then a sophomore, scored 32 points against the Blue Devils, which is tied for 10th all-time in Tar Heels history against the Blue Devils. North Carolina won its 11th game in a row, beating Duke 103-82 — one of six times that season that the Tar Heels broke the 100-point mark.

“Jordan became a man on a mission in the second half,” wrote The News and Observer’s Joe Tiede, “one who had sternly resolved to put his team’s attack back into high gear. He scored 19 points in nine minutes as the Tar Heels went on to a 103-82 Atlantic Coast Conference basketball victory over freshman-laden Duke.” 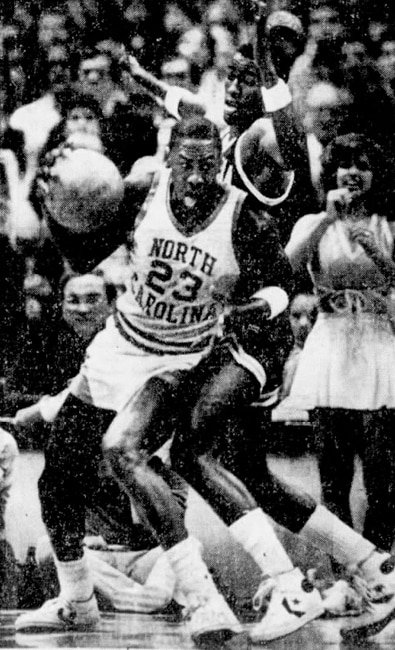 Why we picked it: Jordan scored a career-high 39 points, thanks to an impressive 3-point shooting performance

Jordan and teammate Sam Perkins combined for 62 on that Saturday, which is tied for 19th in Tar Heels history for the combined point total between a pair of teammates.

“‘The best player I’ve ever seen in college was David Thompson. Michael Jordan is that kind of player.’ That’s how Georgia Tech coach Bobby Cremins summed up Jordan’s career-high 39-point performance against the Yellow Jackets at the Greensboro Coliseum Saturday,” the Asheville Citizen-Times reported. “‘Jordan was fantastic,’ Cremmins added. ‘He was the difference in the game.'” 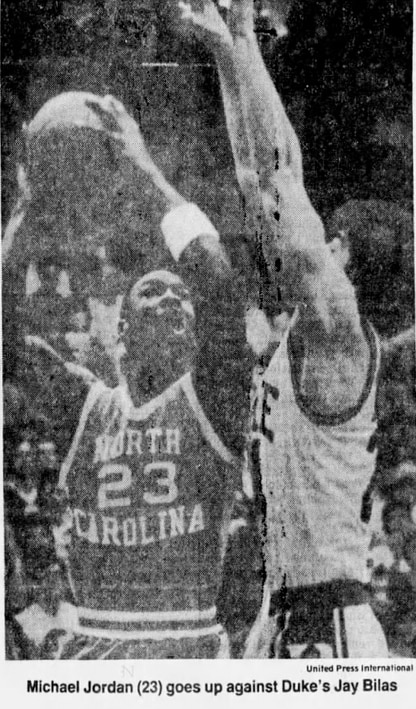 Why we picked it: For the second time in 1983, Jordan scored one of the 10 highest point totals for a North Carolina player against Duke

For the second time of Michael Jordan’s sophomore campaign, he scored 32 points against Duke, as the Tar Heels once again cracked 100 points in a 105-81 win against the Blue Devils in their regular season finale. For the regular season, North Carolina outscored Duke 208-163, and the Tar Heels finished atop the ACC standings with a 12-2 conference record.

“Jordan had little trouble getting his points,” the Asheville Citizen-Times reported. “When he wasn’t tossing them in from three-point range, Jordan was driving through the middle of layups and short jumpers. ‘I had a lot of opportunities to score and just took advantage of them,’ said Jordan. ‘I do seem to play well against Duke, but maybe that’s because they have so many freshmen on their team.'” 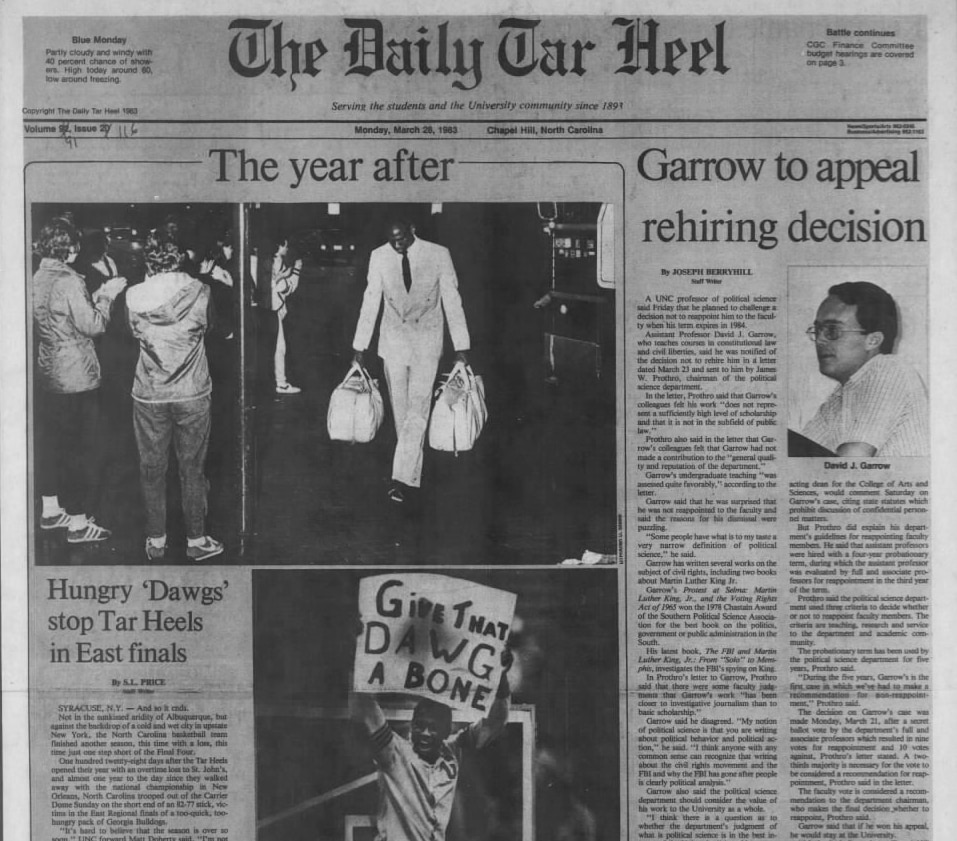 Why we picked it: Jordan had his best statistical performance in the NCAA tournament to date

In a losing effort in the East regional finals, Michael Jordan scored 26 points with six rebounds for the Tar Heels, which was at the time, his best point total in the NCAA tournament and eight points better than his previous best.

“And so it ends,” reported The Daily Tar Heel’s S.L. Price. “Not in the sunkissed aridity of Albuquerque, but against the backdrop of a cold and wet city in upstate New York, the North Carolina basketball team finished another season, this time with a loss, this time just one step short of the Final Four.” Price, by the way, went on to become a senior writer at Sports Illustrated from 1994 to 2019 and author of four books. 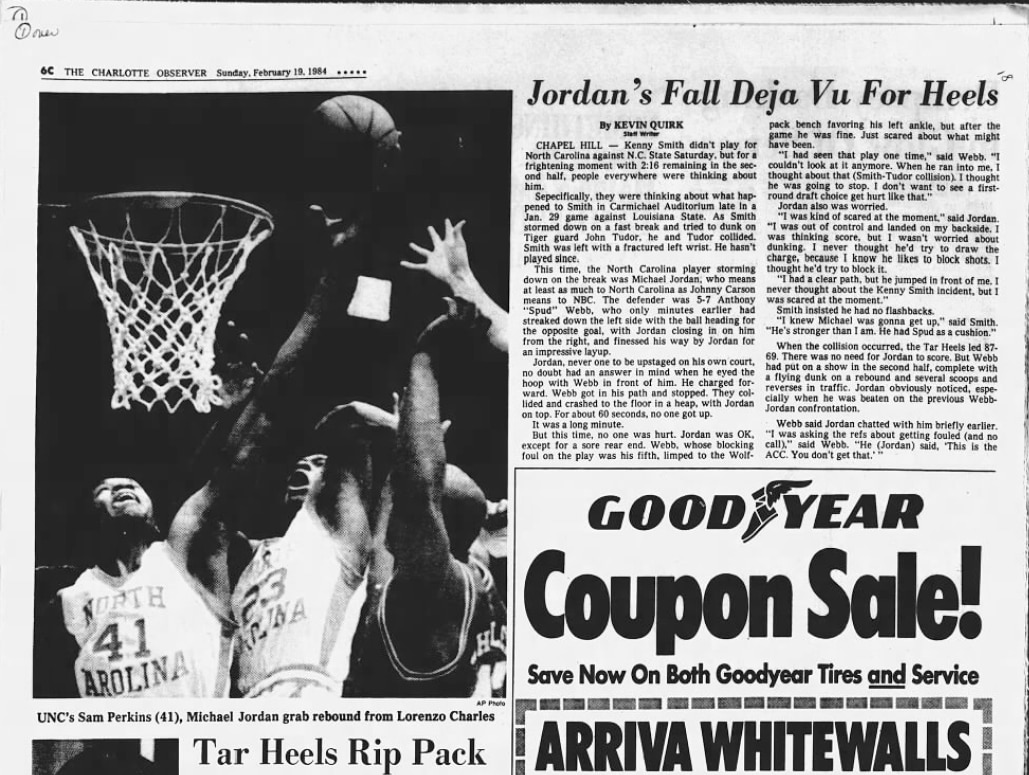 Why we picked it: MJ tied his second-highest career point total against an in-state rival

During Michael Jordan’s junior season, when North Carolina was nearly a wire-to-wire No. 1 team (the Tar Heels were ranked No. 2 for one week starting in late November), Jordan led the Tar Heels back from their only regular-season loss with a 95-71 win against rival N.C. State. He had 32 points, which is tied for seventh in North Carolina history against the Wolfpack, and he also had six steals, which is tied for the program-best against N.C. State.

Jordan was 12-of-18 from the field and 8-of-11 from the free-throw line. He also had eight rebounds and two assists.

“‘When we got a run it didn’t help us,’ Wolfpack coach Jim Valvano said. ‘We never had an opportunity to make the game tense. The opening spurt was the ballgame. Michael Jordan is just great. When he shoots a turn-around jumper fading away you can’t stop it.'” 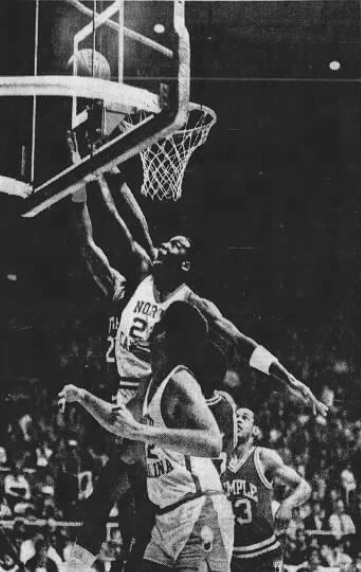 Why we picked it: Jordan set a new NCAA tournament career-high in his final season in college

In the opening round of the 1984 NCAA tournament, Michael Jordan scored an NCAA tournament career-high 27 points on an efficient 11-of-15 shooting to go along with six rebounds in a 77-66 win against Temple.

“Eventually, the offense warmed up, the smaller and outmanned Owls wore down and North Carolina showed why it will continue its tournament travels wearing the favorite label,” reported The Charlotte Observer. “After halftime, Michael Jordan scored 15 of his 27 points, point guard Kenny Smith returned to his pre-injury form and the Tar Heels shot 66%. Oh yeah, and the Tar Heels stopped handling the ball as if it were a candy bar left in the sun all day.”